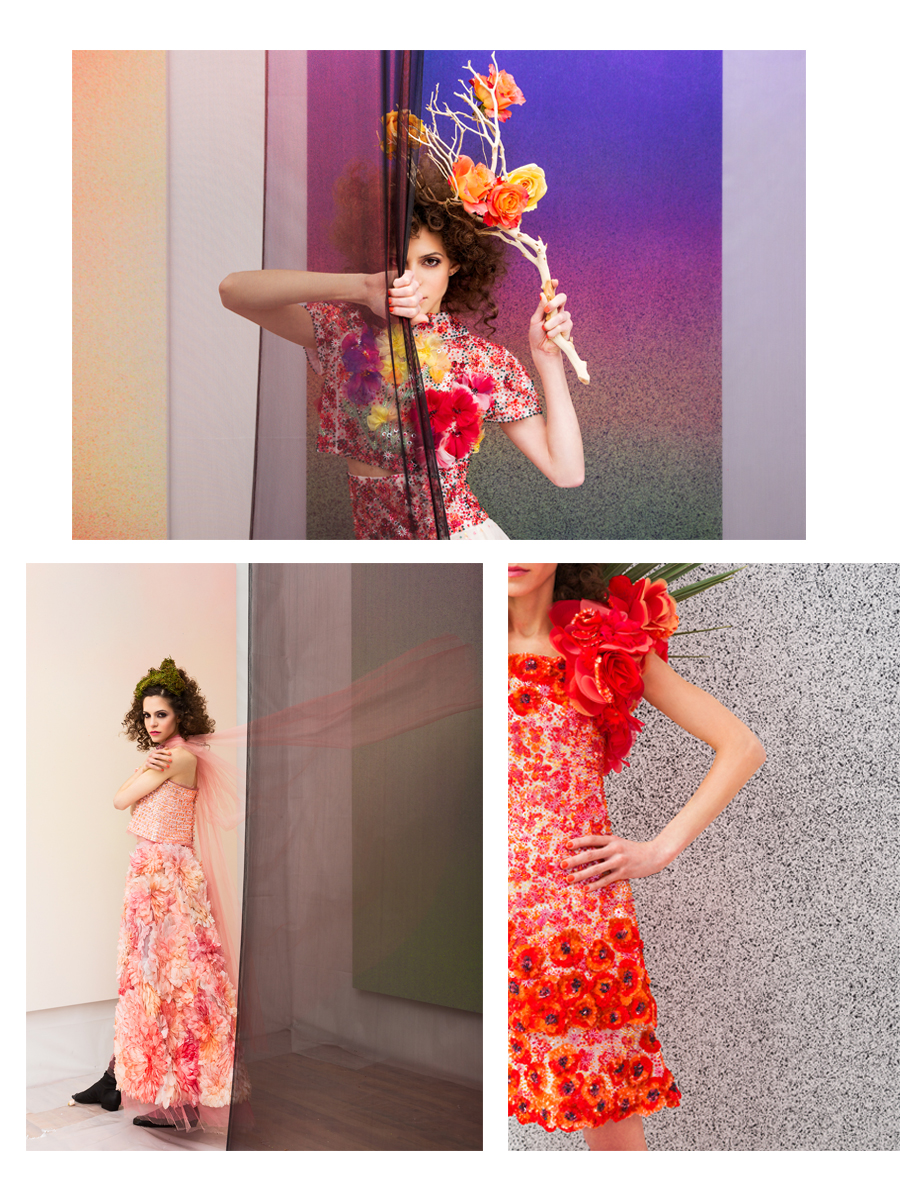 The Chanel Spring 2015 Couture Collection is all visual ecstasy on high. Bursting with intricacy and the most exquisite detailing these pieces come into their own fantastical life entirely by hand. Adorned with delicate petals and tiny beads of pollen, the looks allude to a magical garden that may never cease to exist. Staying true to Karl’s visionary, beneath all this splendor is an edge. Flat black sock booties with the ease and glide of a ballet slipper and slices of stomach convey an attitude of punk elegance and eccentric charm. A veil of mystery and wonder whose match I serendipitously found in the works of Zane Lewis.
One could look at Zane Lewis’s artistic trajectory as a metaphor for death and rebirth. His cumulative artistic output, which at first glance seems stylistically disconnected, is cohesive when looked at through this lens. Lewis’s early work consists of Neo-Pop portraits of contemporary icons, such as Brangelina, Pope Benedict XVI, and Charles Manson. The Warhol-esque images collage acrylic paint skins onto plexi glass and often incorporate vertical paint pours or “bleeds”. Lewis talks about the North American tendency to treat these figures like gods, seeing our reverence and obsession with celebrity as a kind of worship. In this narrative, the paint bleeds, which gush from the eyes, forehead or mouth become stigmata.
Then, around 2009 the aesthetics of his work shift radically. While material exploration of paint continues to be of interest to the artist, Lewis rejects iconic imagery. The new work, called Shatter Paintings, speaks of nihilism and symbolizes a candied death of false realities where paint is applied like thick, goopy icing and is laced with dangerous shards of colorful glass, or in some cases broken glass is affixed to mirrored surfaces; either way it’s a literal shattering of reflection and illusion. His work sits defiantly in this place for a while and then re-emerges in 2014 in a place of immovable stillness. Lewis’s work is reborn into a visual nirvana where celestial ethernet spaces of warm gradient static and partial rainbows pervade. The new paintings create an infinite space inside an infinitely long moment.
Interestingly, the cycle of his visual exploration runs parallel to his alleged life story. During Lewis’s young adulthood he undergoes a physical death and resurrection. Sometime around 2009 his website proclaims he is dead, and subsequently corrects the statement. After this peculiar death/rebirth his public profile diminishes significantly. It seems the timing of his “corporeal” departure corresponds with the end of his representational painting period. As there is less public information available about him, the distinction between fact and fiction in his life starts to blur.
One piece of information that consistently surfaces on the internet is the artist’s genetic connection to James Dean, who is seemingly a distant cousin. James Dean, cool, sexy and aloof, is the ultimate Hollywood icon who tragically dies at the age of 24. That Lewis and Dean are linked on sites that discuss Lewis’s art certainly adds to the construction of the myth about Zane Lewis. This link to Dean reiterates the theme of youthful death and resurrection, for after death James Dean is resurrected as a cultural icon. After Zane Lewis’s faux death, he is not resurrected, instead his paintings are. In both cases the idea of reality is present and not present. Death exists and yet it is denied, and is replaced by our fetish for youthful, cultural icons that pass before their time. Through this process they are immortalized in our eyes. Lewis smartly attaches his work to this idea.
Lewis’s metamorphosis has pushed him through the looking glass into a world beyond reflections, beyond the idea of selfhood and hierarchy. Soothing veils of soft color saturate the uniformly sized works. His new, minimal paintings flip back and forth between macroscopic and microscopic worlds, either resembling hot, glowing star fields in distant galaxies, or soft, velvety surfaces of African Violets. The color fields that seem solid from a distance break up into tiny particles when viewed up close, and if you stand in front of them long enough these fields almost emit a post-punk purr of synthesizers and haunting melodies. Although the paintings hover in a calm place, somewhere inside the calm lies a ghost from the past, a born-again punk bohemian spirit I embody on this occasion and have yet to fully reveal.