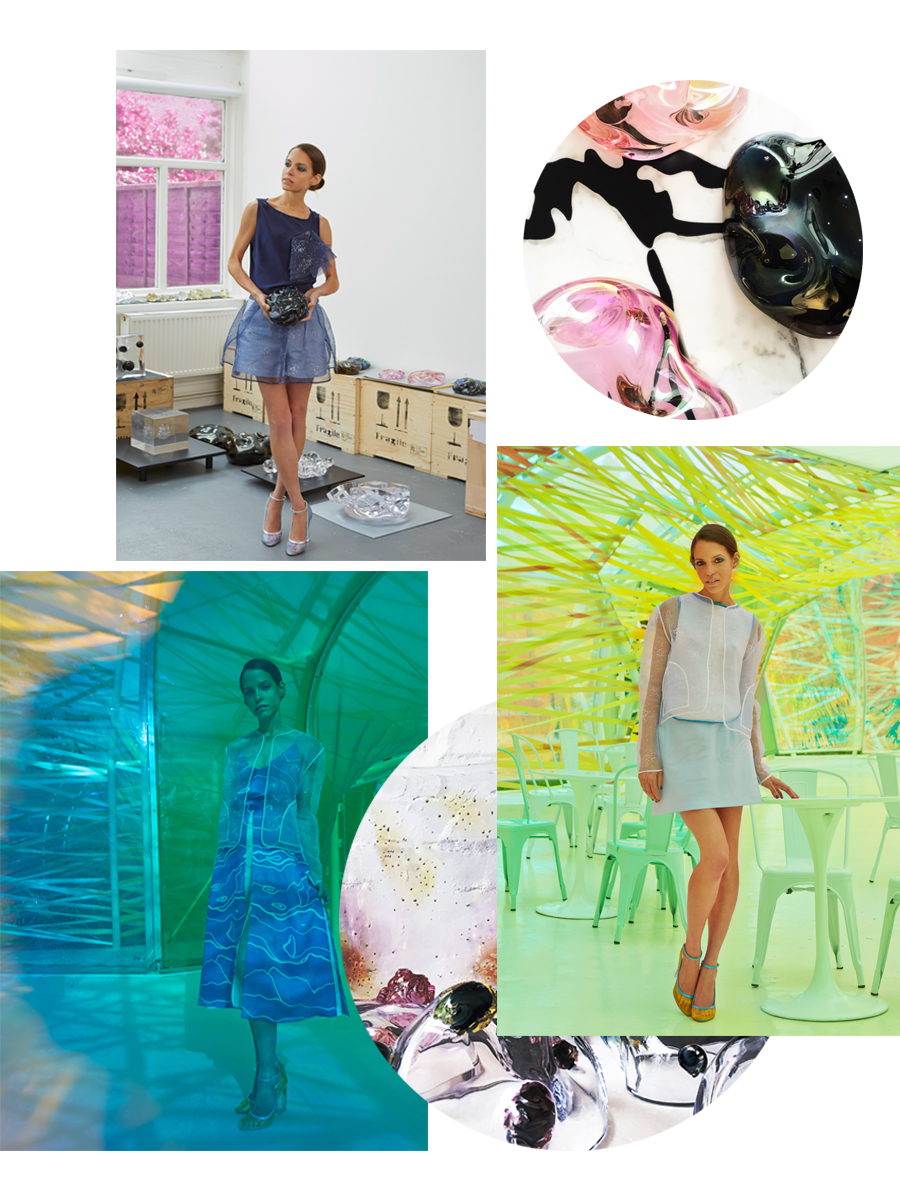 The sun shines through the multi-colored transparent walls of the Serpentine Pavilion creating vibrant cast shadows and reflected light. The structure glows like an interstellar nebula emitting a full spectrum of stardust colors. The Pavilion’s structure is based on an organically shaped steel skeleton which is bound together by fleshy swaths of colored plastic. A floaty mesh jacket sprinkled with Swarovski crystals and a printed dress cut from a piece of sky stand in harmonious mystery, elegantly effervescent creations.
A natural place for me to capture my latest intrigue, a collaboration between artist Flavie Audi and designer Alexander Lewis. Flavie’s background in architecture informs her sublime glass sculptures which appear as spatial meditations that exist as worlds unto themselves. Alexander creates an orbit around the female body with his striking sense of textiles and form. Their two worlds come together flawlessly in their creative alliance for Alexander Lewis Spring 2016 Collection. Beginning this season Alexander Lewis joins the Swarovski Collective 2016. Through the incorporation of crystals a dazzling dialogue is formed, rendering a collection the artist and designer truly initiated together.
“The starting point was blue, just shades of blue, from black to white with only blue in-between.” — Alex
“A gradient goes back to a narrative, it has past, future, present. All the work that I’ve been doing so far has this feeling of liquidity, organic, water-like.” — Flavie
As artist/designer collaborations are an increasing fascination for me, the levels of depth that can be achieved, while in London I jumped at the chance to layer on my own interpretation to Flavie and Alex’s collaboration as well as sit down to discuss the nature and genesis of their project.
“Originality occurs when you add and combine different disciplines” — Flavie
“We were always talking about light, refraction of light, reflecting light, how light moves not only through Flavie’s work but just light use in general because that is something that is very important to Flavie.” — Alex
The sense of drama that both Alex and Flavie create in their work is a result of two very different design processes, Alex begins by weaving a vivid story, Flavie is driven by form and process, allowing a more interpretive narrative to unfold. While collaborating with artists is a part of Alex’s practice, this is Flavie’s first foray into fashion and perhaps not her last by observing her enthusiasm and the organic fluid way her ideas and aesthetics translate into garments. What rose to the surface as we spoke in Flavie’s studio was a shared closeness and affinity towards materials, Alex has designed and fabricated his own textiles since his debut collection in 2013, while Flavie became infatuated with glass in the final year of her architecture studies. Also, a shared openness and an embracing of “happy accidents” and elements of chance perhaps is what makes this meeting of minds magical.
“The narrative around my objects is the way you move around them, the way the light is moving, they vibrate, they oscillate. For some people it will remind them of a deep ocean, a primitive light, a constellation, microcells, it is up to the individual to make their own story, a dreamscape.” — Flavie
“Alex takes many chances, and almost celebrates them.” — Flavie